Pimmy Hall grew up in Chaiyaphum, Thailand and worked as a Sales and Marketing Manager for a four star hotel in Bangkok. In 2016 she relocated to Cairns with her husband and their daughter. Fascinated with the changes her body went through during and after the birth of her baby in 2015, Pimmy developed a keen interest in anatomy and physiology.

Pimmy loves receiving massage treatments and believes it helps with stress relief and body maintenance. In 2017 she headed back to Thailand to study for a certificate in Thai Massage. In 2018, she enrolled at the Aminya Natural Therapy Campus in Cairns where she completed her Massage Therapy certificate VI and her Diploma in Remedial massage.

During her studies, Pimmy worked with various massage shops in Cairns. After qualifying as a remedial massage therapist, she worked at a Physiotherapy clinic. Pimmy’s areas of clinical interest include sporting injuries and chronic pain. She works closely with other professional practioners such as Physiotherapists, Chiropractors and Naturopaths should her patients need referrals. Pimmy enjoys swimming, Zumba dancing and practicing her massage treatments. Having worked in various businesses around the town, Pimmy opened her own Remedial massage clinic called Cairns Massage Champions. As the business has grown and Pimmy has built up a successful reputation in town, based on referrals and recommendations, Pimmy has engaged a team of like minded therapists.

The team are all similarly qualified and we look forward to meeting you! 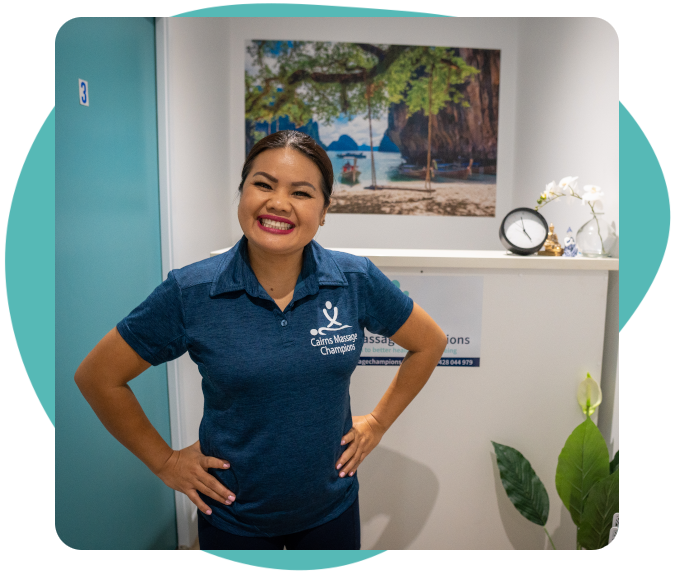